Painting is pretty much drawing, with paint brushes instead of pencils or charcoal. I was encouraged from an early age and remember studying Dad’s hand as he constructed things with his pen. The floors of my childhood were spaces to roll out my father’s spare architectural plans, flipping the grey side over to reveal a large, fresh piece of white. This scaled-up area for my drawings led to ambitious maps of made-up countries, whole landscapes of dinosaur worlds with terrifying ravines and soaring crags (great for spanning with flimsy rope bridges! -for the dinosaurs to use, of course), plan-views of castles, underground labyrinths and cut-away sections of high-rise mouse cities. My older sisters were avid drawers so I had to try and keep up.

Out went the small brushes…

Nearing the age of nineteen, an old high school friend procured for me a lovely pull-out pelikan watercolour set he had liberated from the art room somehow; this became my travelling companion on a rites of passage trip to India and Nepal. 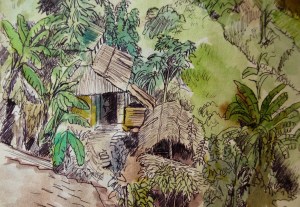 The set came into its own on railway platforms, rooftops, beside the Ghats and along Himalayan treks, often attracting curious children and adults alike, who would wait until the paintings were almost dry, then turn through my travel journal’s pages. Depicting their world through sketches and watercolour paintings became an instant icebreaker; often leading to impromptu portrait sittings. On successive trips overseas I continued the journals, accompanied by the trusty watercolours, which had upgraded themselves to a Windsor & Newton box which I bought in Tasmania. It was strong enough to slip in the back pocket. This casual situation with the little stubs of pigment came to a close when I enrolled in Max Angus’s watercolour course on the Bay of Fires, in 2003. Out went the small brushes, in came the big boys, quality paper and serious blobs of actual paint; on a real palette for goodness sake. My world was in transformation. Max, who was 88 then, bombing about in an old station wagon between Binalong and Taylor’s Beach, opened up the demanding terrain of the watercolour landscape with heroic deftness and confidence, oh, and a speech at every turn to inspire the troops. The reason I’ve enjoyed using these terms is that for anyone who hasn’t dived off that painting deep end, the immediacy of the medium in calligraphic technique is tremendously exciting but also a highwire act. The safety net ought to consist of tossing the sheet over one’s shoulder and starting again; not attempting to wade through a bungled mistake. Great fun.